Home About About the Six Metres

About the Six Metres

The International Six Metres have a long history, and are still fiercely competitive today. 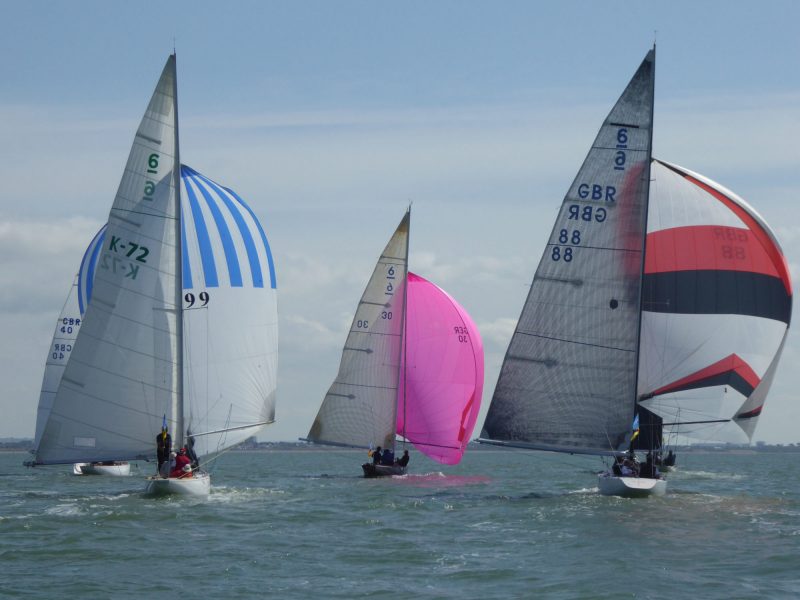 The International Six Metre class of competitive sailing boats has a long history, stemming from the introduction of the International Rule – also known as the Metre Rule – in 1907. Several sizes of International Rule boats became popular, including Eights and Twelves, but it is the Sixes that have formed by far the largest class.

Six Metres are all similar in design at around 11 metres, or 36 feet, in length. Their ideal sailing conditions are calm waters with winds up to force 5. They are raced with a crew of five people, although they can be handled with fewer. Most have a Bermudan rig with a mainsail and overlapping genoa. On downwind legs they will sail with a large spinnaker.

Much like racing cars, Six Metres are stripped down to the basics to save weight. They provide little shelter from the weather and have no creature comforts. They are notoriously wet boats to sail, meaning that the crew must come prepared for all conditions.

The International Rule very rapidly became the basis for designing yachts to a specific rating so that they could compete boat-for boat without a handicap. Unlike One Design classes where every boat is identical, boats built to the International Rule have a degree of flexibility in design. As long as their dimensions conform to the Rule, designers can be creative, meaning that each boat is different but they compete on a level playing field without handicaps. This degree of creativity helps to push the boundaries of boat design, each new boat trying to gain the competitive edge over their peers whilst still meeting the requirements of the class.

The original First International Rule was supposed to be reviewed after 10 years, but the world situation meant that the review which generated the Second Rule did not complete until 1923. A further review produced the Third Rule in 1933, and the Rule has been subject to a number of amendments since then, but the basic principle of the Rule has remained unchanged.

Throughout the history of the Class, the International Six Metre has been a hotbed for technical innovation with the world’s leading yacht designers and sailors bringing often radical concepts and technical excellence to the fleet. An Olympic Class from 1908 to 1952, the Sixes were also frequently used as a development testbed for the America’s Cup 12 Metres.

The Class has inevitably seen peaks and troughs of activity. The 1920s and 30s saw a frenzy of new boat construction, but after the second world war there was a focus on smaller boats which brought about a downturn. The adoption of the Twelve Metre for the America’s Cup in 1958, however, brought renewed interest in the International Rule and generated a number of design innovations, and so began the resurgence of this extraordinary class.

Clever management of both the Rule and the international class association by its dedicated officers and members has seen the International Six Metre return to its rightful place as one of the most exciting and important racing fleets. It brings together the elegance of the Classic Division with the cutting-edge development of the modern boats in the Open Division, in a regatta circuit that takes competitors to some of the most spectacular yachting venues around the globe. The World Championships, held every two years, has in recent years has been held in Canada, France, Germany and Finland with sailors bringing their boats across the globe to compete in this exciting and often tightly fought competition. Such is the level of sailing, that the class attracts some of the best sailors in the world, from America’s Cup winners to Olympic gold medalists.