Congratulations to our World Champions

It is now a week since the 2019 World Championships in Hanko, Finland. A great few days sailing was had by all in the beautiful Baltic sea, with sunshine, and perhaps not as much wind as we would have liked.

Our two new champions for the Open and Classic classes respectively are Junior (SUI77) and Bribón Gallant (E16). Congratulations to the crews of each for your success!

I thought it would be interesting to see where these two boats crop up in the archive website and what we can learn from the information we find.

Junior’s profile page gives us a good description of her history so far and shows us that she appears in nine archive documents, seven of which relate to the 2007 World Championships in Cowes, in which she was also victorious. The records for the race show us the hand written results and observations of the race officers as the competition unfolded over a number of days. The immediacy and fluidity of the documents are very appealing. 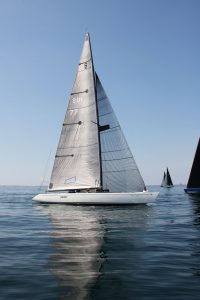 Junior also appears in the BISMA newsletter from June 2013, where she appears in a report on the 2013 British Open, held that year as a joint event with the French fleet in La Trinité sur Mer in Brittany, France. Again, Junior was victorious.

In an very early Classic newsletter from 1987 she appears on page 2 as Fleau. At this time she was owned by ISMA’s then newly elected President, Bernard Haissly. In this record she is praised as the best places Swiss boat in the British Open Championships that year.

Bribón Gallant has been enjoying some remarkable success in recent years. While she has always been known as a fast boat, in the last few years she has been almost untouchable in the classic division at international level, winning every European and World championships since 2017. She is also notable due to her change of ownership in 2016, when she was bought by HM Don Juan Carlos I of Spain, bringing the excitement of royalty to the class. His Majesty come from a family of top level sailors, having competed himself in the 1972 Olympics in the Dragon class. 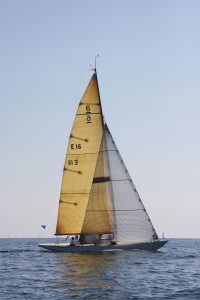 The boat currently appears in three archive records, all of which are Classic Six Metre newsletters. In the earliest newsletter, dating from 2003, we learn in a short entry that she was then in Canada and then named Talizman (KC10). She was only sailed occasionally.

The next record, published one year later in 2004, tells us that the boat has now changed hands and is now owned by sailing star Eric Jespersen. Jespersen was intending to renovate her in preparation for the 2005 sailing season on Puget Sound.

The final record in which she appears – the classic newsletter published in December 2005 – suggests that the restoration took longer than anticipated and it was hoped that she would be ready for the 2006 season.

A snapshot of history

While the information in these records is well within living memory, I hope they have demonstrated that we can use the archive to create a snapshot view of the history of individual boats in the Six Metre class. Over time our intention is for the archive to grow and to build up the information available. This is particularly important for the history of the class that has fallen outside of living memory, where we have no experts remaining who can remember the events detailed in the records.

As ever, we are relying on individuals and organisations to make their collections available for us to publish on the site, making the history of this fabulous class accessible and available to all.