I have recently been contacted by a handful of people with links to YouTube videos of Six Metres. It reminds me that if you look hard enough there is plenty of Six Metre history already online, and YouTube isn’t a bad place to start your search.

Historical videos are hugely valuable to allow us not only find out information about a particular event, but also to get some idea of the experience of being there. They offer a unique view of history that written accounts simply cannot conjure up, and add an extra dimension to our understanding of the events and the era in which they were held.

A quick search on the popular video site throws up a number of films, some old, some more modern, of the Six Metre class. I have linked a few of my favourites here:

The Six Metres were an Olympic class boat from 1908 through to 1952. This particular competition, held in 1924, was won by the Norwegian boat Elisabeth V. Her crew included Anders Lundgren, Christopher Dahl and Eugen Lunde.

This is the earliest of the videos I have found showing the Six Metres sailing. The grainy, silent, black and white film (please ignore the modern music) is so evocative of its era, reminding us of the timeless appeal of the class.

The boats Elisabeth V (N13) and Sandra (F79) can be clearly made out in the film. The final results of the 1924 Olympic sailing can be found here. 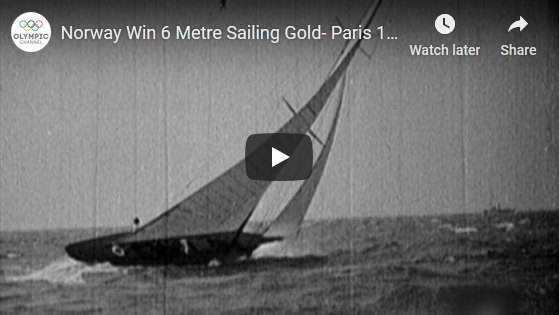 The first Olympics since the end of World War Two, the 1948 games became known as the “austerity games”. London played host to the majority of the sports, but Torbay in Devon was home to the sailing.

The Six Metre racing that year was won by the US team in Llanoria, with Herman Whiton on the helm. One of the most successful Six Metres, Llanoria went on to become the only Six Metre to win two golds in the Olympic games, bringing home the medal again in 1952.

A number of boats are easily identifiable in this footage, including Llanoria, Raili, Apache, La Bandera and Lalage. You can see the results for the 1948 Olympics here. 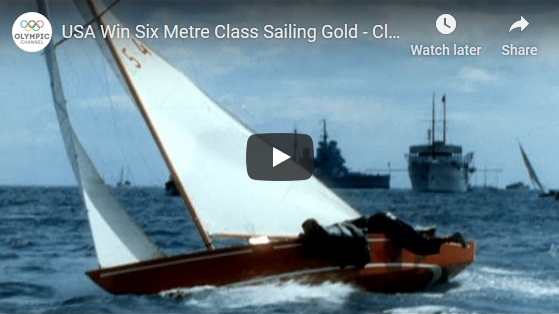 Our third video shows something quite different altogether. This is seemingly rare footage of the first time a new Six Metre hits the water, with the launch of Buzzy III in 1956.

Buzzy III was designed by the great Olin Stephens and was built in Toronto, Canada by J. J. Taylor & Sons. She has had a full sailing career, having competed in the very first World Championships in 1973 right through to the 2012 Europeans.

The footage shows the new boat with her gleaming red-orange hull waiting in her cradle to be launched. We then see as she is eased gently into the water and then towed along behind a motor vessel. The video is a scant minute long, and has no sound, but still manages to capture the calm, quiet anticipation of the launch of the new boat.

This is by far the lengthiest of the videos listed, but only the first five minutes or so  contains footage of the Sixes. Recently featured on www.scuttlebutt.com, the film was made and narrated by Warren Miller, a celebrated ski and snowboarding film maker.

The footage of the Six Metres is definitely worth watching through to the end, and includes information on the design and construction of the class – colourfully called a “dinosaur of toughness” by Miller – match racing and some hair-raising footage of a dramatic collision between US106 Sexapil and US101 Poisson Soluble.

The final video is much more up to date, and the only one from the 21st Century. In July 2007 Cowes on the Isle of Wight played host to a series of Metre boat regattas which celebrated the centenary of the introduction of the International Rule in 1907. The Six Metre World Championship that year was held shortly after the centenary regatta, adding to the celebratory atmosphere.

The four minute video summarises the events of the championships, including reports on the difficult sailing conditions and the winning boats.

This video is particularly nice to see as our archive contains some of the original paperwork relating to the organisation of the event, including the notice of race and sailing instructions, as well as hand written race results and correspondence. This material was kindly added to the archive by the Royal Yacht Squadron, which was the organising club for the event. You can see their archives here, and the final race results for both the classic and modern divisions can be found here and here.

We would love to know if you have any favourite Six Metre videos. Please share them in the comments below.

If you have any old footage of your own that is not on YouTube, please do get in touch as we would love to add it to the archive.